This piece alludes to war and violence.

In a world that relies so heavily on mass media to communicate, the personal nature of global problems can be downplayed. Casualties become statistics, missiles become toys, and celebrities’ private lives become entertainment. With the barrage of negative news reports that we are exposed to on a daily basis, it is easy for people to become numb and feel powerless.

My work, The Edible News, deconstructs global issues that are used to be seeing in a broad and negative way and reconstructs them into something familiar and tangible: food. My intention is to encourage the viewers to reinvest in these unapproachable issues by attempting to close the gap between the news and its audience, thereby bringing the issues out of the media and into reality. The viewers are placed at the table where he or she becomes an integral part of the issues rather than a mere “watcher”. 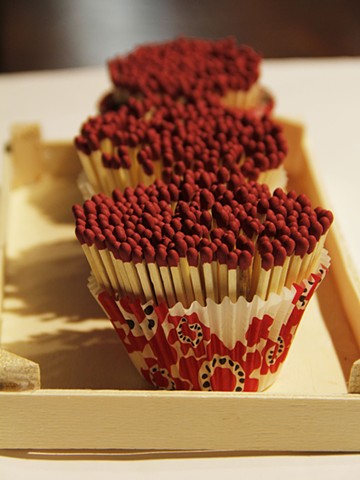