Some observers compare the romanticized search the world over for the blue rose to the quest for the Holy Grail. So ardent were various gardening groups to seek and find a blue rose that in the 1840s, horticultural societies in Britain and Belgium offered a substantial cash award to the person or persons who produced the first blue rose. It would be decades before their wish would come true.

In 1990, Suntory Limited of Japan and Florigene Limited of Australia formed a joint venture in their quest to create the world's first real blue rose. Until then, no natural blue rose had existed because of the rose flower's lack of blue pigment. The joint venture achieved its goal in 2004, with the development through biotechnology of the first blue rose, Applause.

My mission was to paint a blue rose, though the blue rose does not exist. People strive for what doesn't exist and suffer through the process. Knowing painting the blue rose would be impossible I didn't even try. I let it create itself. Spray painting a canvas was my first step and this worked out well as when it began to rain the purple I threw at the canvas, with the slick cover of spray paint, helped the purple to drip in the rain and form images that I had no intention to paint. On the bottom I used a steel nail to scratch in grass and brush for the background. The grass and brush disappeared when the purple bled into it. And what now remains on the bottom looks like some kind of scroll message.

After the rain stopped and the purple settled, I did go in to define a green stem and a representation of the petals of a blue rose. However, what surrounds the blue rose is where the question of reality occurs. The rain created images bleeding different blends of purple. You can make out a body to the right of the blue rose kneeling and looking up to it. There seems to be a small angel figure on top of the bowing figures back looking up to the blue rose. On the left there are stick-like figures with their backs turned to the blue rose.
PREV / NEXT   9 / 56
BACK TO SCIENCE & ART SHOW 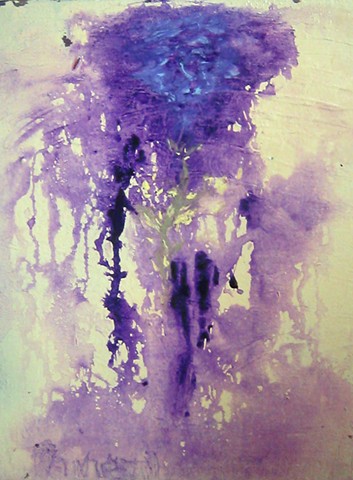