As so many unique flowers appear in magical forms and the unknown intrigues me, I only paint flowers. Flowers, one's that create themselves. The form of this painting only took shape when I added shoulders to the bouquet. I was terrified after I added a body to the flowers. It takes upon a devilish form. Nothing that I'm into. Yet, art creates itself and the meaning at least to me quite accurate. Nature has its own law and dimensions. Before I added the shoulders and a sloping nose, the painting bored me as simple flower shapes extended on a cheap canvas. When a human body was incorporated, the meaning of the painting became haunting. Flowers on their own scattered in a meadow can be overlooked. Just like a poor painting with boring flowers. Then the mind, man/female, takes over and asks for more until a simple idea takes shape into a devilish ghoul. This painting also appears in the acclaimed short film "The Stranger" debuting at the CIMM festival, April 20th 2013. 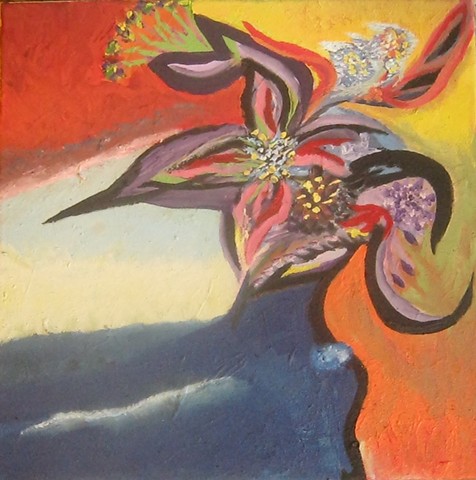