I have been playing with hearts out in the world in different settings for a while. What would this vital organ be getting itself into if it weren’t so busy pumping blood through veins? Hearts in many ways resemble fruit- in color, in size- in their plump ripeness it seems like you could just bite right into one.

These unidentifiable mammal-headed women have discovered the deliciousness of hearts and are feasting away, under the curious eyes of a troop of lizards. They have unknowingly stumbled into this age-old story of the Garden of Eden, but nothing is how it’s supposed to be. The mammal-women feel no guilt or remorse, and are relishing in their cannibalism. They are meant to evoke a much older set of mythological values, ones that have been erased from our cultural memory of women in lieu of figures such as Eve. They are Medea, or Procne and Philomela, women for whom cannibalizing their offspring was a minor offense in comparison to the outrages committed against them by their husbands. They are demi-gods, who may not be fully human or have the same set of values as a human being, but are their own agents and can choose to be a little evil if it suits them. They may or may not be fully aware of the horror of their actions, but it doesn’t matter, because they don’t share the shame and disgrace that Eve does for committing the same crime.
PREV / NEXT   9 / 23
BACK TO FEEL SHOW 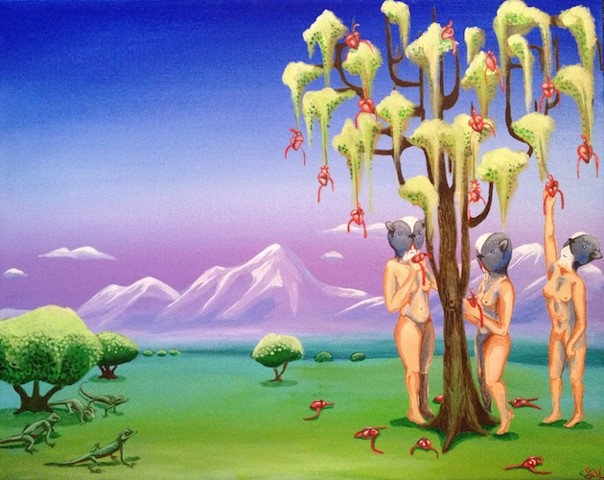