In my painting "the eye" is depicted as "NOT All-SEEING". Long ago the eye chose to look through a spectacle because it was blinded by its own ego, self-promotion, and gratification. It rejects the blood which was shed (the blood is shown within the painting as tears freely flowing from the seventh trumpet). The eye's vision has been forever clouded because of its defiant nature and non-acceptance. The eye is now eternally disconnected, from the original body, and exists in another body (pictured in the painting as a dismembered striped red and black coiled snake). The eye was condemned to look for its "God-given" perfect vision, but will never find it because of its initial rejection of God.

I chose to incorporate the hexagons within the painting because I have read that this shape is a basic pattern seen in compounds, which support life, making up part of our DNA molecular structure. I have placed it in the background of this painting to represent our place in the heavenly universe and all creation's loving interconnectedness with each other and The One True God.

The pyramids, within the hexagon, point both upward and downward symbolizing the dichotomy of both the good and evil potential of all we partake in and the freewill we have to decide what direction we will take. It is also symbolic of the image placed on our almighty dollar; yet another benign, but often misused object, which can easily become
corrupted /idolized.

The bright and contrasting rainbow colors, which can almost be heard emitting from the final seventh trumpet's blast, represent the beauty people see initially when they are introduced to, and blinded by, misleading idols and doctrines. The blood, still shed today, represents the gift and choice we can make now or will make in that final hour.

Ultimately the painting projects my own belief in the fallible imperfection of man-made archetypes / idols which people worship, and hold dear to themselves. Sadly I believe many are misled and robbed of their God-given eternal sight and interconnectedness, but as you read this today I invite you to choose to remove your spectacles, so as not be blinded by false light. Each of us has the ability to accept God's gift of grace, and hear the often silent trumpet call before the last note is played and the final orchestra is revealed.
PREV / NEXT   6 / 19
BACK TO FEEL.INTROSPECT.R... 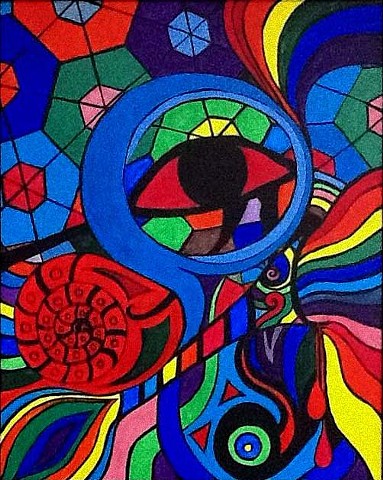