Holi is an ancient festival of India and was originally known as 'Holika'. Historians also believe that Holi was celebrated by all Aryans but more so in the Eastern part of India. It is said that Holi existed several centuries before Christ. However, the meaning of the festival is believed to have changed over the years. Earlier it was a special rite performed by married women for the happiness and well-being of their families and the full moon was worshiped. Holi in its current form is a religious spring festival celebrated by Hindus, as a festival of colors. It has its celebrative origins in Gujarat, particularly with dance, food, music, and colored powder.
The painting depicts a group of married women playing Holi with colored powder.
PREV / NEXT   4 / 12
BACK TO KRISHNA DUTTA 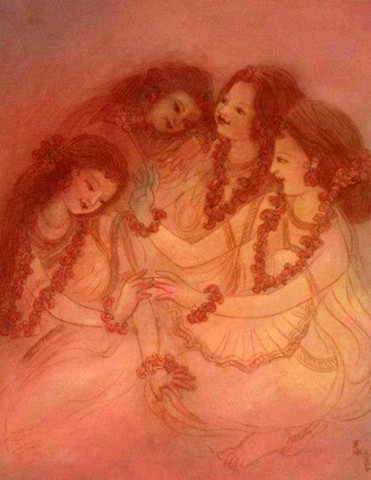