Siddhartha Gautama Buddha was a spiritual teacher from the India on whose teachings Buddhism was founded. The word Buddha is a title for the first awakened being in an era. In most Buddhist traditions, Siddhartha Gautama is regarded as the Supreme Buddha of our age, "Buddha" meaning "awakened one" or "the enlightened one." The time of Gautama's birth and death is uncertain. Recent opinion dates his death to between 486 and 483 BCE or, according to some, between 411 and 400 BCE.
Gautama is the primary figure in Buddhism, and accounts of his life, discourses, and monastic rules are believed by Buddhists to have been summarized after his death and memorized by his followers. Various collections of teachings attributed to him were passed down by oral tradition, and first committed to writing about 400 years later.
The painting captures Gautama as a young prince with his mother, long before he became the Buddha
PREV / NEXT   7 / 12
BACK TO KRISHNA DUTTA 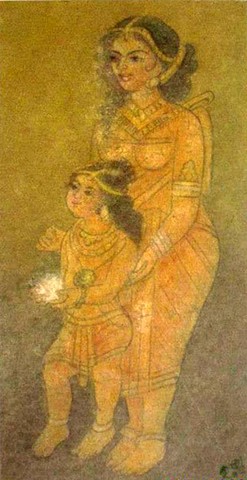