Recently, I have been fixated with a delusional structure known as Penrose’s Triangle. The triangle cannot exist except in the two dimensional form, but it convincingly maintains an illusion of three dimensionality. At first sight the “impossible form,” is a seemingly solid object, but upon realizing the absurdity of its dimensions, the visual becomes complex and the viewer is forced to question the assumption of its reality. While this optical illusion is not new, I became interested in manipulating color to further push the viewer’s belief in sight.

I had acquired triangle shaped canvas stretchers and kept them around for some time before I discovered Penrose's triangle, which immediately produced this painting. The double nested triangle is perhaps the most visually stimulating in this series, but it makes for a wonderful place for color to become playful. 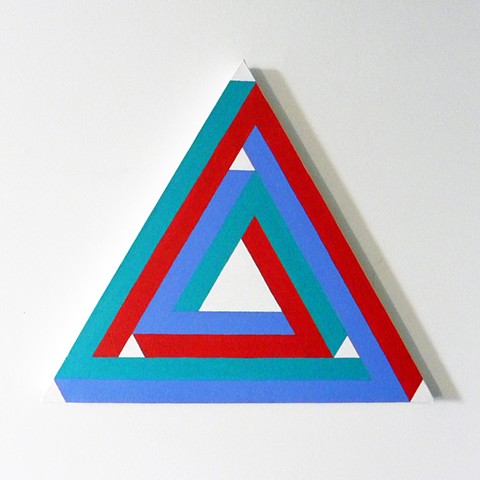